The September/Rumble update is getting closer and closer. A good team to unveil yet another feature from the update.

The colors will be randomly dropped. So if you have more variants of one topper. Not a problem. Just trade them in!

June is looking to become the month where Rocket League changes it all. New features that were requested by the community are being implemented in this June update. And that excites us!

You can find these items in your Inventory menu. Also Rocket League explained that a player-to-player trading type of thing is in the works!

NOTE: In the interest of full disclosure, we plan to implement Player-to-Player Trading in a later update. Some items, like those with “Painted” or “Certified” attributes, may become much more valuable if you can trade them to other players.  The “Trade-In System” is designed to let you get rid of unwanted or duplicate items, but you should consider carefully what you trade now versus what you might want to keep for future player-trading opportunities.

It’s been a while since Rocket League did a #RLNews but today is a good day! More info about the ending of Season One and what items you will be getting!

If you haven’t ranked up yet to Bronze or higher, we suggest you do it right now. Only then you will be getting the special topper as seen above. The Topper will be in the color of your highest achieved rank. (solo, solo standard, 2v2)

You will receive this items once the next patch in February will arrive. This will automatically mean that season One will end with the patch update.

Rocket League will also undergo a slight change when it comes to displaying items. Items will now be categorized in common (stock), Premium (paid DLC) and Limited (Special Events). With the new upcoming patch they will also introduce the Uncommon items. These items will be randomly awarded when you complete an online match in Rocket League. Rocket League promises new rare Toppers and Antenna’s for you to unlock.

One interesting thing to note is that the new “Uncommon Item’s” drop-rate won’t have a fixed percentage like the seasonal items do. Instead, your chances of getting an “Uncommon Item” increases the longer you play the game. After earning an Uncommon Item, the time then resets and you start all over again in your quest to get another one. This should give players who spend a lot of time playing some sweet new loot to accompany them along the way. — Rocket League

Also, Rocket League will share some new hot info on Friday the 22nd. We assume this will be about Season 2, new DLC and more info about what 2016 will bring us! 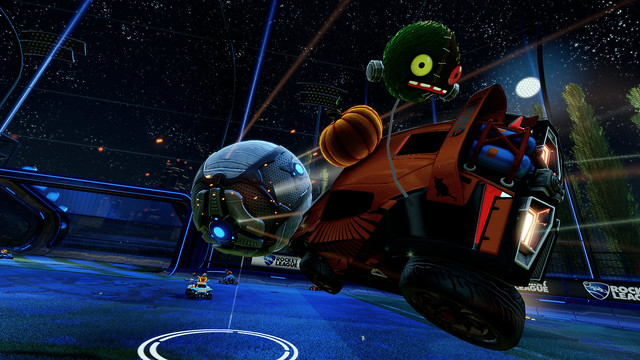 Looks like Rocket League is doing the trick or treat thing! For a limited time only there will be exclusive Toppers, Wheels, Rocket Trails and Antenna’s for you to obtain in the game. How to get it? Simply by playing! But (there is always a but) there is a catch:

Available as post-match item drops, each Halloween item can be unlocked simply by playing matches like you normally would (Win or lose!). Once you’ve found an item, it’s yours to keep forever, but if you don’t find the ones you want by November 2nd, you’ll have to wait until next year for a shot at them again. — Playstation Blog

So what special items are there for you to obtain, well:

6 items. So for anyone who wants to stand out. Obtain them all and you will be worshiped forever!