A special day for any Back To the Future fan who also loves to play Rocket League. The best of both worlds collide today for a special treat: The Delorean Battle Car! Announced a few weeks back and today downloadable.

Since the DeLorean was not only a favorite of many Rocket League players but also the dev team of Rocket League liked the car very much. And now with 88mp/h you can have your own Marty McFly moment in Rocket League.

The Back To The Future Car Pack will go on sale in the PS Store and on Steam for $1,99 or your regional equivalent. Rocket League stated that the Car Pack will be out around 12AM PT for Steam. PS4 users will have the DLC during regional PS Store updates

REMINDER: The DeLorean Time Machine will be out on Steam Oct. 21 at 12am PT and on PS4 during regional store updates — Rocket League 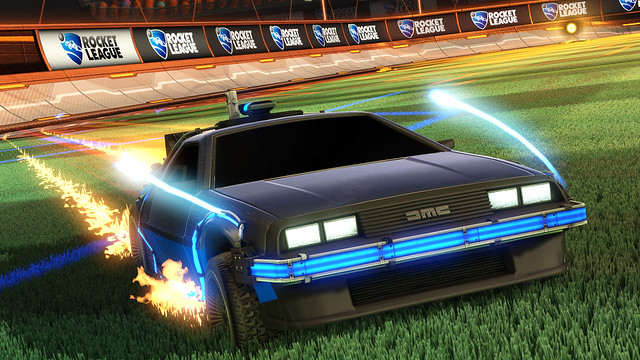 As a response on the moderator announcement in /r/RocketLeague

Hey all, we’ve had a few messages sent to us about why certain threads have been removed from this forum (regarding people playing with items not yet released or officially available at all) and that’s because anyone using those items are using pirated versions of our game.

Under “Rule VI” on the sidebar over there, piracy talk isn’t allowed per our rules, (and we’re definitely not cool with all the links we’ve seen point to the sites that offer it, therefore, we’re trying to keep those from popping up).

Just wanted to make an official statement on this, since it’s been coming up and so there’s no confusion as to why these things are disappearing when they do.

(Also, removed a moderator post about similar content to this, so there is a clear line that this is an official statement) 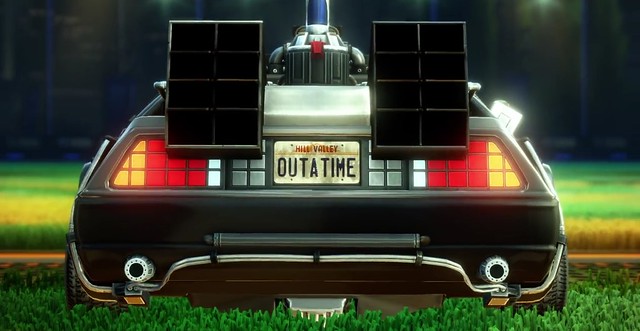 The past hours numerous topics on Reddit have emerged with players either posting pictures of the DeLorean already in the game, or gameplay from the new DeLorean showing off the new details of the new Battle Car that is coming to Rocket League.

Tonight the moderators from the Rocket League subreddit made a statement on Reddit about where the teams stands on people that are spreading either images or gameplay of the DLC that is to come, and how they will act on it in the coming days:

Users have made posts about seeing players using the DeLorean before the release of the DLC and they’ve been removed by Psyonix, but since there hasn’t been a statement from them I’m just making one myself, hopefully this won’t be a problem.

These players are using pirated versions of the game which unlocks all current DLC that was patched into the game yesterday. Players will (presumably) be banned from playing online. Because of this, further posts about it will be removed because it’s becoming borderline spam at this point.

I hope this post serves to address the issue rather than censoring information without any response from the moderators. Sorry for not having done this earlier, I had just only gone home and read the moderator mail about this. Remember that anyone can pirate the game at their own will, but if you truly enjoy the game and its DLC, purchase it and support Psyonix for their continual patches and updates for Rocket League.

If you have any issues, contact Psyonix through here: http://psyonix.com/support/.

Coming on the same day as Marty McFly traveled Back to the Future (21 October 2015), the iconic Delorean will be available as a playable Battle-Car in Rocket League. Just when we were not hyped enough by the Revenge of the Battle Cars DLC that is coming tomorrow!

This is what the VP of Marketing, Jeremy Dunham had to say:

Truth be told, we used to fantasize and joke about having the DeLorean Time Machine in our game months before it even came out. We were all such huge Back to the Future fans here at Psyonix, that it was one of the few “Holy Grails” we had hoped for besides having a hit game. The fact that we’re getting both of those “best-case scenarios” in the same year is an amazing accomplishment for us, they’re things we’ll never forget!

Hopefully you’ll never forget your time with the DeLorean Time Machine either, as we’ve worked meticulously to recreate its look, feel, and folding jet-wheels just as they appeared in the original motion picture trilogy. Best of all, it’s a heck of a lot of fun to play with — and comes complete with its signature “Burnt Rubber” Rocket Trail to boot! — Playstation Blog

The Delorean will be available in the Back to the Future Car Pack that will be in the PS Store on October 21. You can pick this pack up for $1.99 or the regional EU equivalent. For every Rocket League player, this is a must buy!

P.S: In case you want to see the magnificent trailer, go here!